Why Is My Air Conditioner Not Cooling the House in Havertown PA?

Once the summer hits, you need an AC that’s ready for battle. Otherwise, you’re in for hot, sticky days and sweaty, sleepless nights. But, what if you turn on your air conditioner and then realize it’s not cooling the house?

Maybe you’re not getting any air circulation. Or, the air is coming through, but it’s warm or weak. There’s a variety of possibilities, but they all boil down to you being overheated and frustrated.

If you’re holding off on calling for a repair or on a waitlist, start with the possibilities we’re outlining in this article. You might get lucky and fix it yourself. Or, you’ll at least have a better idea of what to expect.

The Thermostat Is Broken or Set Incorrectly 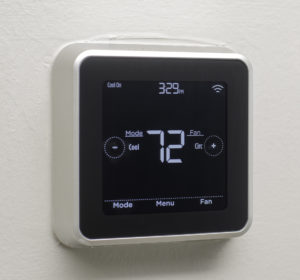 First things first: Check your thermostat. If you’re lucky, you can fix the problem with the flip of a switch. Make sure you’re set to “Cool” and not “Heat” or “Fan Only.”

It’s easy to just turn on the system but leave it on “Heat” from winter. In that case, the system is waiting for the temperature drop below the setting you put in. Then, it turns on the heat.

But, you want it to start cooling once the temperature reaches that call. Of course, that won’t happen on the wrong setting.

There’s also the “Fan Only.” Sometimes it says, “Circulate.” This setting runs the fan but doesn’t provide any heating or cooling. Sometimes, you get fooled thinking your AC is running but not working in this case.

If that doesn’t work, your thermostat may be damaged. Change the battery, and hopefully, that solves it. If not, put a thermometer up to the device. See if your gauge matches the reading on the thermostat. If it doesn’t, it’s reading the room incorrectly.

You Have a Coolant Leak

If your air conditioner has a coolant leak, you’ll hear it working, and you’ll feel air coming through the vents. But, that air is warm — or, at least, not cold enough. 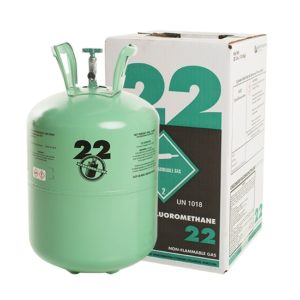 Here’s what’s happening: The system is circulating air just like it should. But, the coolant, which cools the air, isn’t there. So, the air just passes through untreated.

If you’ve entirely run out, the air is warm. If there’s still a little, you’ll get some cooling but not enough.

Check outside for a hissing sound or a sweet yet chemical smell. Those are the signs you’re losing coolant or refrigerant.

That refrigerant is supposed to run in a closed-loop, meaning you don’t need a recharge unless something is wrong. So, call your HVAC contractor right away. The sooner they catch it, the easier it is to refill.

If your system is more than ten years old, it may be a bigger problem. You can read more about that here. But, the bottom line is to be proactive as soon as you spot this happening.

The Air Filter Is Clogged

Here’s an easy fix: A clogged air filter. You know those one-inch-thick screens you buy at the hardware store? You should change them every month. Three months at the absolute most.

When you don’t, they get clogged. All the dirt and dust the filters trap builds up more and more until not even the air can pass through it. 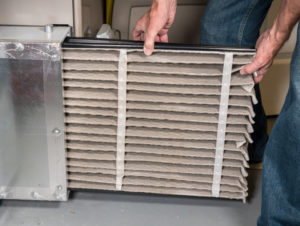 At that point, you’ll hear the system kick on, but you won’t get air through the vents. It’s an easy fix — just replace the filter — but it’s essential.

If you’re getting weak or no air, then you’re causing the system to overwork. It’ll lead to a breakdown. Consider, at least, changing the filter more often if you take it out, and it’s dark grey instead of white.

The System is Too Big or Small

Have you always had this problem? Does it seem like every summer since you moved in, or got that new AC, has been way too hot?

Sometimes, a wrong-sized system is the culprit.

People understand right away why having one that’s too small won’t work correctly. It’s just not strong enough to cover the entire house. You’ll notice that it’s always running. And, the areas near the vents feel cool, but not much further than that.

But, the trickier situation is the over-sized unit. Bigger doesn’t necessarily mean better in the HVAC world. Instead, it can mean useless.

Here’s what happens: Your AC is so powerful that it blasts way too much cold air into the house right away. It hits the thermostat quickly, and the temperature change is enough to turn off the system.

Depending on your system’s age and how big it is, you can try extending the ductwork, so the excess forced air has someplace to go. But, that gets expensive on its own.

However, if you know what’s going wrong, you can keep it in mind when you’re ready to replace it.

Your AC is Getting Old

Your average central air condenser makes it up to 15 years. That’s if you’ve maintained it well and put a cover on it.

If yours is approaching that age, and especially if you haven’t gotten it serviced a lot, old age may be why you’re not getting the effect you want. 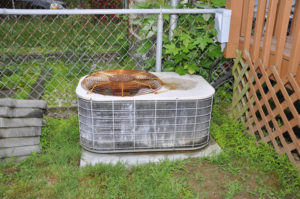 We see this happen little by little over a few years. Most times, people don’t notice it at first. Then, one summer, they’re just too hot and a little humid all the time. Without regular maintenance, you may not realize it’s happening until it’s too late.

At that point, the system simply gets worn down. Parts aren’t working as well, hoses are worn out, and electrical connections aren’t firing the way they should.

You can start with some regular servicing, and hopefully, that gets you through the year. If you’ve had the system for more than ten years, be prepared for a replacement.

If you’re AC isn’t cooling your house in Havertown, PA, start running down this list. With any luck, you’ll hit on an easy solution you can fix yourself. If not, call John Cipollone today. We’ve handled air conditioning service, repairs, and installation in Delaware County for more than 50 years, and we’ll get you cool and comfortable again as fast as possible.