If you have an older home in Havertown, the Main Line, or anywhere in DelCo or Montgomery County, you’re probably already dreading the annual window air conditioner ritual.

It’s getting them out of storage, cleaning them off, dragging them around the house, and hoisting them into windows.

And, for all that work, you get cooling that’s louder than your TV and an electric bill that’s higher than any other time of year.

So, as spring approaches, it’s an excellent time to consider a more efficient, comfortable, and cost-effective alternative: Ductless mini splits.

Now, both setups have benefits and drawbacks to each of these setups. So, in this post, we’re breaking out the pros and cons of each one.

If you’re thinking about a change for this summer for your home in Havertown, Wynnewood, or anywhere in Delaware County or MontCo, then the more information you have, the better.

So, call or email us if you have more questions. We’re happy to help you out.

Some benefits of window air conditioners are:

Another way to look at this is that people like window air conditioners because they’re not a huge investment, and they can customize the cooling in different parts of the house.

It’s much cheaper for a home with no ductwork because you don’t have the huge added expense of building out ducts and vents.

You can buy as few or as many as you like. They run from around $70 to a few hundred dollars each. 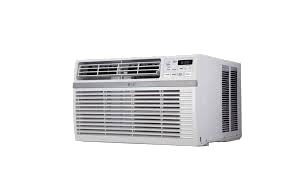 Meanwhile, the whole house doesn’t work off one thermostat. The problem with that is when the second story or basement is a different temperature than the first floor — where you usually put the thermostat.

When that happens, the central air works to ensure the first floor is just the right temperature. But, it doesn’t take into account something like a bedroom upstairs, which is still too warm.

At that point, you have a comfortable living room and dining room. But, when you go to sleep, you’re way too hot.

It’s why, at the least, people just put a window unit in their bedroom. If they’re out most of the day, it doesn’t matter as much if the living room is too hot.

Plus, it’s easier to open the windows downstairs and use fans for a cross-breeze. Many home designers created layouts with that in mind for cooling. 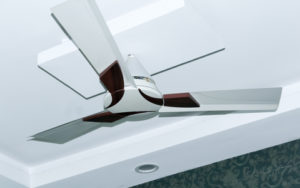 But, it’s tougher to sleep when it’s warm. And, the upstairs is often more segmented, which cuts down on air circulation.

So, extra cooling upstairs is essential to many people. And, they get that with a window unit.

Some reasons window air conditioners aren’t the best include:

Now, just because you can put a window AC anywhere you need it doesn’t mean the result is always great. And it’s certainly not cheap. 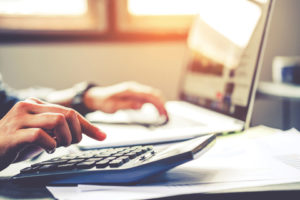 And, that could be worth it — if, in general, these things did a better job.

Some of the chief complaints — besides cost, of course —- are noise and maintenance.

Most of these units get up to around 60 decibels. That’s about as loud as a conversation. Which, of course, makes it tough to have an actual conversation or watch TV when they’re working.

Next is the hassle of getting them up and running each spring: Dragging them around the house, cleaning them, and pushing them up into your windows. 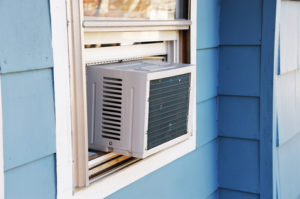 It’s a lot of work. Then, you factor in the cost and the fact that many people feel like they don’t do that great of a job anyway.

Advantages of a Ductless Mini Split for Cooling

Advantages of a ductless mini split vs. window air conditioners for cooling are: 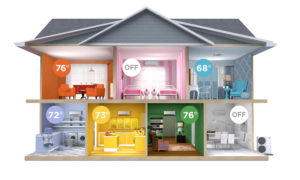 Both offer zoned cooling. In other words, each unit works independently of the others.

With ductless, every indoor air handler has a built-in thermostat. So, it regulates the temperature for the space it’s in without answering to one centralized gauge for the entire house.

But, what the mini split does better is cool the area evenly.

Each air handler uses special sensors that detect hot and cold spots in a room. Then, the fans circulate the air to reach those problem areas.

That, in part, is why one handler can handle an entire first floor, even through separate rooms. In some cases, you can also use one for the upstairs, too.

Next is sound. We talked about 60 decibels for window units. Mini splits max out at 20 — about the same as leaves rustling outside. 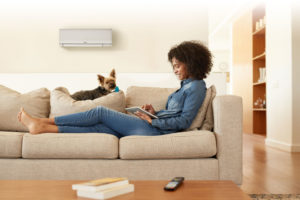 And, most of the time they’re working in a low-power mode to maintain the temperature. So, they’re using even less energy and making even less sound.

The end result is better, quieter cooling with a fraction of the operating cost.

Of course, all those benefits come with a price — and that amount turns off some people.

Upfront, at least, these systems are on the expensive side. You can expect to pay $3,000 for one zone fully-installed. And, the price goes up from there.

If you’re thinking in terms of a replacement for window units that cost much less, it seems like a staggering jump. But what you’re doing is replacing those ACs, bypassing central air, and going up another step.

Mini splits are much more energy-efficient than those options. They use significantly less electricity and make almost no impact on your bills.

So, you’re saving money in the long run.

They also qualify for rebates from PECO, which we covered here. So, you can take more money off the upfront cost.

After that, we hear people’s concerns about where we’ll place the air handlers in the house. Ideally, we would put them all on an exterior wall, so it’s easy to run the refrigerant lines to a heat pump outside.

On the occasions when we can’t do that, however, it’s often easy enough for us to utilize closets, crawl spaces, attics, and other out-of-the-way areas that keep the lines out of your living space.

Dollar for dollar and pound for pound (of cooling), we see the ductless mini splits winning out over window air conditioners every time

If you’re ready for an upgrade, then it’s absolutely worth seeing what installation would look like in your home.

Here at Cipollone, we can design the perfect system for you. And, we’ll help you make the most of your investment with rebates and a setup that keeps your home more comfortable than ever in the summer.

Call or email us now for a free consultation.