How Will A Ductless Mini Split Look in My Havertown Home?

How Will A Ductless Mini Split Look in My Havertown Home? 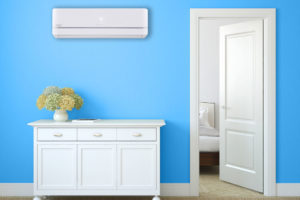 We talk a lot about the features and benefits of Mitsubishi ductless mini splits — after all, there’s plenty to discuss.

And, one question we often hear is, “What will this look like in my home?”

Sure, ductless has been becoming much more popular over the last twenty years. But, it’s still not nearly as commonplace as furnaces, ductwork, radiators, or traditional air conditioners.

As a result, people hear a lot about what it does. But, they’re not sure what it will look like in their home.

So, in this post, we’re focusing on the aesthetic side of these systems Sure, we’ll briefly go through how they work, so everything makes sense.

After that, we’ll see how big the components are, what they look like, and how we fit them in.

Long story short: these systems take up less room than traditional setups. And, we’re often able to tuck the component away and out of sight.

Meanwhile, be sure to reach out if you have any more questions. Or, if you’d like to learn more about how this could fit in your home, email or call us for a free consultation.

Let’s start with why it’s called a mini split. This term is pretty much synonymous with ductless heating and cooling.

That’s because the system uses a combination of outdoor and indoor units. And, it’s smaller than conventional HVAC setups. 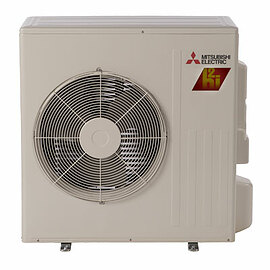 Let’s start outside, with the heat pump. This component resembles compressors for central air conditioning you often see outside homes.

But, these have a much smaller footprint. They’re shorter and narrower. Quieter, too — we’ll get into all those specs a little later.

The heat pump is responsible for sending heat into the house in the winter and removing it in the summer.

Inside, you have the air handlers that circulate the air. They come in a few different designs, and again we’ll get into those specifics in a bit.

But, what they all have in common is that they’re equipped with thermostats. This feature is significant because you install a different handler in every area of the house you want to treat.

This way, if you’re using ductless for your entire home — as opposed to one or two rooms — then each zone of the house has independent temperature control.

The final components are the refrigerant and condensate lines, and power supply cords.

The system works by sending refrigerant in a closed loop between the pump and air handlers. It travels through a flexible, skinny line connecting the two.

Then, there’s a separate line for condensation. As the system dehumidifies, water vapor enters the handler and turns back into a liquid.

The condensate line collects that water, so it drains outside.

Finally, the power cords supply electricity to the various components.

Typically, we bundle these all into a line set. And, in most cases, the set travels through in between rafters. This way, you don’t see them inside.

How Big Are the Parts of a Mini Split?

Now that we’ve gone over the various components of a mini split let’s look at their sizes and dimensions.

There’s some variation, of course.

In particular, heat pumps can come in a few different sizes. The model depends on how many indoor units it supports and how much power your home needs.

And, different manufacturers produce models with slightly different dimensions. But, they’re all similar.

For this article, we’re looking at Mitsubishi products, since they’re widely considered the industry leader.

How Big Is a Heat Pump?

The most common heat pumps are two feet tall, 32 inches wide, and a foot deep.

A model that size usually accommodates up to two indoor units. The next model up is around the same height and width. But, it’s two feet deep.

Other models are twice as high. They look as if there are two on top of each other. 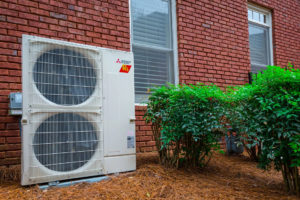 Usually, you only need a foot or so of clearance from the unit to your house. And, some models have a side-discharge. So, you can get it very close to the house, as long as there’s nothing next to it.

How Big is an Air Handler?

Air handlers are a little trickier because there are a few different types. But, we’ll start with the most common models.

These rectangular units are on average, one foot tall, 32 inches wide, and 9 inches deep.

We’ll mount this high on the wall, near the ceiling. If there’s a window in the room, we often line up the unit with the top of the window.

And, we can tuck it in a corner to keep it even further out of sight. These units do such an excellent job of circulating air that they don’t need a lot of room around them.

These are bigger than high-wall models. We mount them on the wall but low, almost touching the ground.

The average model is 27 inches tall, 32 inches wide, and about a foot deep.

It’s the larger of the two. But, since it’s near the floor, it stays out of sight.

Other Types of Air Handlers

There are a few other options, too. Namely: Recessed ceiling cassettes and short-run ducts.

We won’t get as far into these, because you really don’t see them. A cassette gets installed in the ceiling and is flush, so you don’t notice it.

And, we use a crawl space or similarly enclosed area for a ducted unit. This larger model runs a few short-run ducted lines.

How Loud is a Ductless Mini Split? 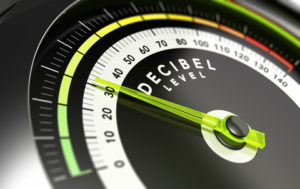 The heat pump and air handlers for ductless mini splits are whisper-quiet. Each one produces less than 30 decibels of sound. That’s on par with leaves rustling or people whispering in a library.

For comparison, an outdoor AC compressor gets as loud as 55 decibels. That’s about as loud as a normal conversation.

And, if you’re replacing a window air conditioner, get ready for a huge change: Those models go up to 70 dB. That’s louder than a lawnmower.

If you want to know more about exactly how a system like this will look — and sound — in your home, call or email Cipollone today. With a free consultation, we’ll get started designing a system that’s perfect for you.