How to Thaw a Frozen Pipe in Havertown, PA

If your pipes are frozen, you need to warm the pipe, so the ice inside it melts. You can use a hairdryer or space heater. Or, soak towels in warm water and wrap the pipes. If those don’t work, wrap them in electric heating tape.

Frozen pipes aren’t an everyday occurrence during the winter in Havertown, PA. But, the weather does reach the right conditions from time to time.

If it’s colder than 20 degrees outside, then you run the risk of water freezing in your plumbing lines. And, it’s not unheard of for the temperature to dip that low in January or February. 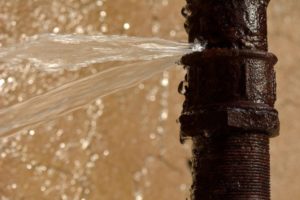 Once there’s ice blocking the line, water — and pressure — builds up behind it. Enough force and the water ruptures the line.

Then, you’ll have dozens of gallons of water spilling into your house. It won’t take long at all to do thousands of dollars of damage.

Fortunately, you can take a few easy steps to prevent this from happening.

In this post, we’ll look a little closer at those three strategies. Then, we’ll back up and let you know how to be sure that’s the problem.

What to Do When Your Pipes Freeze

If your pipes freeze, shut off the water in your house. Then, turn on your faucets. These steps prevent the problem from getting worse. And, you’ll know once you’ve taken care of it.

Shut Off the Water In Your House 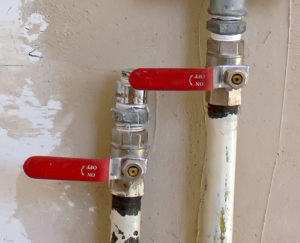 The first thing to do is to shut off the water main to the house. That prevents more water and pressure from building up in the line.

You’re looking for the valve attached to the main. It’s usually a lever, and you’ll need to turn it from twelve o’clock to nine or three. Or, a quarter turn.

The main is often in the basement, near the wall closest to the street. You’ll spot it quickly in an unfinished basement. If you’ve built out that room, check for a closet or small enclosure built near the floor.

Turn On Your Faucets 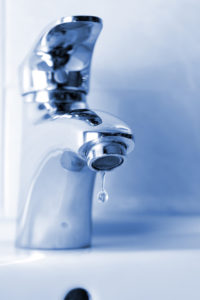 Next, turn on all the faucets in your home. You may still get a little bit of water coming out of some of them before it stops flowing.

That would be whatever water is still in the line on your side of the blockage. Once that’s gone, the tap goes dry.

However, you want the faucets on because it will relieve pressure in the line. And, they’ll indicate when the problem’s solved.

Once the ice melted, water will start coming through the taps again.

After you’ve done this, you’re ready to tackle the problem.

Thaw a Frozen Pipe By Warming It

No matter what strategy you use, the idea is the same: Warm up the pipe until the ice inside it melts. Once you do that, you’re good to go.

The most popular strategy is pointing a space heater or hair dryer directly on the coldest spot.

We’ll get into how you find it in a little bit.

Each heating source has its pros and cons. The hairdryer lets you get nice and close to the problem spot. This way, you can zero in with the thermal energy.

But, you have to stand there with it for a while.

Alternately, you can place a space heater near it. This way, it stands on its own. But, it may take a little longer to warm up.

Don’t Use An Open Flame

You may want to get ambitious and fire up a propane torch. Yes, that will warm the line quicker. But, it will also weaken the plumbing fixture. Then, you could end up with a leak or rupture.

It’s also a fire hazard. So, no open flames. Instead, be patient and stay safe.

Portable heating sources work especially well if you’re zeroed in on the exact spot. If you can’t find the point, or if you don’t have either of those, here’s an alternative.

Soak some towels in warm water. Then, wrap the lines coming from your water main.

The thermal energy from the hot water will spread. And, you can cover more ground at once this way.

It can get a little messy, but it will do the trick. 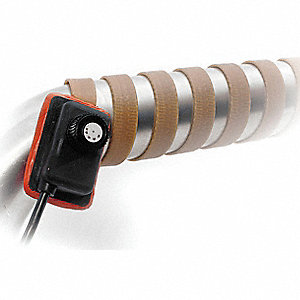 Most people don’t have electrical heating tape hanging around the house. But, if you’re having trouble thawing the ice, or you keep having this problem, it’s worth picking up.

Wrap the pipe with the tape and plug it in. Those nodes will warm up and heat the pipe. You can cover more ground than spot-heating, and it’s more powerful than the hot water towels.

Soon enough, that thermal energy will spread to the ice block.

Let’s quickly go over just how to tell a frozen pipe is the problem and how to find the spot in question.

We touched on this a little before. The most common symptom is when you wake up, and there’s no running water in the house.

You may get a little water until whatever’s in the pipe runs out. After that, you’ll know something’s up.

Frost On An Indoor Line 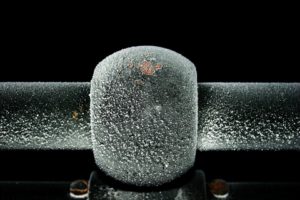 Next, try to find the exact spot where the ice is located. You can often tell when there’s frost on the outside of the pipe.

That’s the coldest spot. Odds are, the ice is right there. You’ll want to focus your heating efforts right there.

But, you won’t always notice this. Sometimes it’s subtle. Or, it’s behind a wall where you can’t see it. But, if the water’s not running and the lines are cold to the touch, start heating. 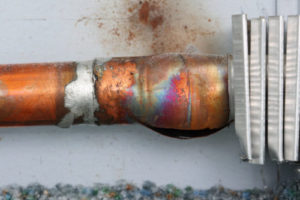 This is not only a sign of the problem. It’s also an indication that things are getting worse. A bulge means the pressure is already pushing on the line.

Make sure you turn off the main and turn on all the faucets right away. Then start warming immediately.

You haven’t had a burst yet, but it could have been close. Have a plumber check the line once you’re solved the immediate problem.

If you’re noticing this problem a lot, the problem could be weak heating and insulation in your basement. That’s where the pipes enter the house.

Give Cipollone a call. We can locate any drafts or cold spots, and help you get rid of them.