What Causes A Hot Water Heater To Leak From The Bottom?

A water heater leaks from the bottom often because it’s rusted. Or, there’s a leak — usually from a bad installation. Most times, a leak from the bottom means you need a new unit. But, if you catch it early enough, there’s a chance you can avoid an emergency replacement.

In this article, we’ll go over:

Meanwhile, if you notice any signs of a leak or other concerns with the water heater in your Havertown, PA home, don’t ignore it! Call John Cipollone Inc, and hopefully, we can repair a small problem before it becomes more severe and expensive.

Why A Water Heater Rusts

Perhaps the most common reason a water heater leaks from the bottom is rust. You can end up with this problem pretty much anywhere on the unit. But you’re in the most trouble when it happens on the underside. 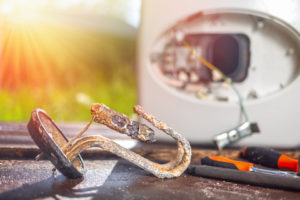 When you consider the weight of the water pushing down, it’s only a matter of time before even the smallest opening becomes a huge hole with water gushing out. At least, if the rust is on the top, you won’t get a leak.

The reason for rust on the bottom is most often moisture around the unit. When the tank’s base is sitting on the concrete or even just above it, any dampness transfers directly to the underside.

How A Water Heater Springs A Leak

If you’re lucky, so to speak, the problem is just a leak from a valve, hose, or another component. If the tech that installed the water heater didn’t do it right, one of these might not be adequately sealed. 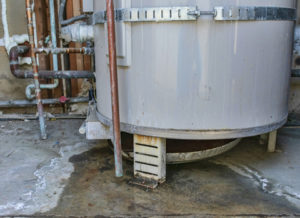 In these cases, sometimes it’s not a matter of the bottom leaking. Instead, water slowly seeps out from an opening, runs down the unit, and you notice it near the floor.

We’ll talk a little bit about finding the source, but first things first: Call a professional. You don’t want this problem getting worse —, and yes, it can get much worse.

Once you’ve called, you can check the drain valve or pressure relief valve on the tank. These are often toward the bottom. Feel for moisture around the openings. That will tell you the source of the problem.

But, even though there’s no rust yet, that’s still a threat. Now, you’ve got water running down the outside of a metal canister. As it meets the oxygen in the room, the oxidation process begins. In other words: that water will cause your appliance to rust.

Even if you’re not noticing a huge puddle yet, watch for these warning signs that your water heater is leaking:

Excess Moisture Around The Unit

Excess moisture sounds like it’s easy and obvious to spot, but that’s not always the case. Sure, you can’t miss a puddle of water. But, a slow drip or condensation can fly under the radar.

If you suspect a problem, feel around the bottom of the unit, and keep an eye out for any single drops coming from a valve. If you notice that moisture or those drops, you may catch the problem before it’s an emergency.

Sometimes, you’ll get clued into a leaking water heater without looking at the actual unit. Have you noticed the water in the sower getting colder sooner? Or maybe when you’re washing the dishes?

If you haven’t made any changes to your routine, then the problem is likely with the eater heater — namely, it’s not heating the water enough.

Now, this could be caused by any of several different problems. But in this case, you’re losing heat from the canister. It’s escaping through the same hole as the water is leaking out of.

Water Doesn’t Get As Warm Anymore 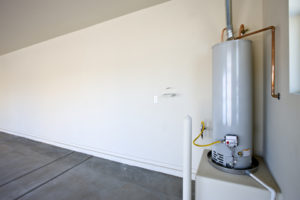 A related problem is when the water temperature remains constant. But, it never gets as warm as it’s supposed. Once again, you’re dealing with heat escaping from the unit.

And, once again, it could be a different problem altogether. But, if you notice either of these, it’s time to do some investigating!

The first thing to check is the pilot light and the control panel on the system. Make sure you can see the flame for the pilot light. If it’s out, you’ve found the problem.

Next, check the blinking light on the control panel. There should be a sticker telling you which blinking pattern means everything’s okay. Or which ones indicate a problem.

If both of these are fine, start checking for a leak.

Remember, it’s crucial to get a certified HVAC tech out the moment you suspect — or especially confirm — a leak. And, it’s especially time-sensitive when that leak is on the underside of the unit. Then, it’s only a matter of time until the bottom falls out — literally. Fortunately, we’re here to help! Call John Cipollone for any water heater, furnace, or air conditioning problems or concerns in your Havertown, PA home.